So much has happened since my last blog, I don’t even know where to begin.

When I last wrote, we were scheduled to trigger on Thursday night for a Saturday retrieval.  We went in for morning monitoring and it was pushed back “one more day” for the next two days (which felt like an eternity).  My life as a human pincushion had me shook (as my students say) and not in a good way.

Each night that our trigger was postponed meant ANOTHER night of MENOPUREEEEE!!!!!  Each night that we pushed the trigger back also meant an early morning trip for monitoring.  On weekends this takes us about a half hour away because the Freehold office isn’t open…which means up at or before 5 every day for about 6 days straight to be poked and prodded.  On these mornings I was especially thankful for the warm and caring staff AND doctors.  Dr. Molinaro seemed to be in charge of the monitoring hours every day, and every day he came in with such excitement.  It made US excited.  I’ll never forget when he said “You are going to do great” the night before the retrieval.  It was the approval and positive reinforcement that I needed in that moment.  I wanted to jump up and hug him…but quickly remembered I was naked from the waist down aside from a verrrryyyyyy thin sheet of paper.

Fast forward to “Trigger Night”, which should be named the most confusing concoction of medicine and time requirements known to man.  After blood work/ultrasound I always get  call from my nurse (or a nurse on call if she is out) to give me next steps.  On this day, the next steps were to trigger.  I thought, OK!  We’ve got this…we have triggered twice before during IUI’s.  Nope.  This was NOTHING like the triggers of the past.  We had to trigger once at 7:50 (yes, that’s right…to the minute) the night before and then again at 7:50am the next morning.  This added another complication because that meant we needed to be at morning monitoring extra early so we would be able to administer the second trigger at EXACTLY 7:50am. There was more.  Two shots, but not the kind that you can just pick up and jab right in… WE HAD TO MIX!

Ok, not a big deal (again)…but when you are pumped full of hormones and juggling several vials of medicine (while a kind lady named Maria whips through directions) you just might panic.  Maria assured me that she would email me everything that we talked about.  Relieved, I put my pad and pen down and focused on looking at/understanding the medicine in front of me.  If time travel was possible, that pad and pen would never, ever, EVER leave my hand (insert monkey covering eyes emoji).  One giant piece of advice for anyone about to embark on this crazy fertility journey is WRITE DOWN EVERYTHING.  It doesn’t matter how repetitive it seems, or how annoyed the person on the other end of the phone or table might be at having to repeat themselves…this is YOUR body, and the more confirmation you have about the VERY confusing and many steps you will need to take the more confident you will be.  I will regret this moment for a long time, and here is why… 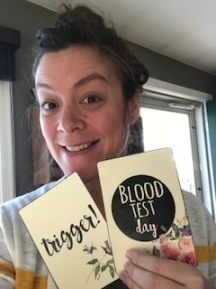 After an extremely early morning of blood work and ultrasound, Bryan and I arrived home for the last trigger.  This was supposed to be our last shot for at least a month.  We were PUMPED (see above).  I was so sure Maria said to take the HCG (Estrogen) again in the morning and not the Lupron.  Bryan thought we were supposed to take both, but I assured him “I am 100% sure it’s the HCG, I would remember!” I was fucking wrong.  Boy was I wrong.  We re-read one of the several pages of directions that were emailed to us (the very, very confusing directions) and realized it was supposed to be the Lupron and NOT the HCG.  We had just taken the HCG.  Fuck.  In a panic, Bryan jabbed me with the Lupron well and we called the doctor’s office to page a nurse on call.  Then I googled…

What did I find?  Of course, an article that said extra Estrogen could compromise the quality of eggs during the retrieval process.  It was ONE article, but it was the first that I looked at…and then I lost my mind.  My world came crashing down.  Had I ruined everything?  Did I just negate EVERYTHING we had been through…all the shots, all the blood work, all the tears?!?  I haven’t cried that hard, and that deeply, since the last miscarriage.  Here I was pumped full of hormones, trying to wrap my head around the fact that my fuckup could have cost us a successful retrieval.  Then, I went eeeeven deeper.  If I couldn’t keep this straight, how could possibly take care of a baby?  I couldn’t keep the three babies we were supposed to have alive, no wonder I fucked this up too.

All he could do was try to squeeze me.  I let him, then I pushed him away, then I let him.  He is a saint, and his support of me that day was unwavering.  He even texted me that he was proud of me (while picking up meds that I will explain later).  Can you imagine? Proud of me?  Why?!?!

For the next three hours we spoke to nurses and waited.  The first nurse said “It’s probably no big deal”…the next “it shouldn’t impact your cycle”…and then the last “it’s probably ok, I mean we can’t go back and change it now anyway”.  Thanks.

I was in a haze.  My mommy was on her way to spend the day with me and all I could do was mindlessly watch “The Ranch” hoping for some of that comfort I used to feel on shot nights.  Then, magic!  It was my doctor.  Dr. Eden Rauch, the best damn doctor I have ever had.  I could hear her children in the background, she was not on call that day and had no duty to call me… I had spoken to the nurses already and could have spoken to a doctor on call.  She said, and I quote “Sara, I was worried about you and wondered if you knew that  everything was fine.  I need you to understand that your eggs will not be impacted by the extra HCG…” 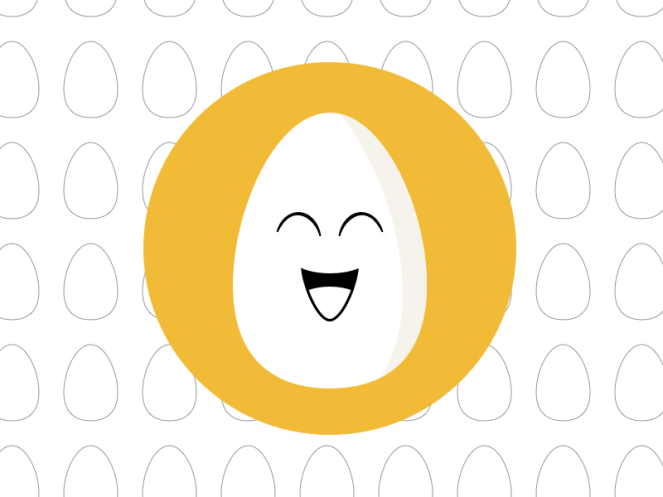 Music to my ears.

Thank you forever, Eden Rauch.  I think I love you.

She went on to explain that the only side effect would be extra discomfort and pain for me following the procedure.  That’s it?  I will take it!  It also meant more shots (Ganirellix) and more pills (Letrozole) to prevent me from going into overstimulation.  Again, I. Will. Take. It.  My eggs were fine, and the black cloud that was once looming over the transfer disappeared.   I made a mistake, one that I thought was devastatingly huge…but everything was OK.  It’s like the feeling you get when you think you lost your wallet, but find it shoved between the couch cushions (times one million).  Pure euphoria. A joy that wouldn’t have been possible without the preceding turmoil.  We were going to be OK.  It’s hard to see that when you spend so much time diligently following all of the rules, and all of the processes that come with with fertility treatments.

As a wise IVF sister told me, “Mistakes are part of the Journey”.

Nobody is perfect, and IVF is really, really hard…and that is OK.

Up next, the retrieval and recovery.

View all posts by justkeepswimming10

3 thoughts on ““Mistakes are Part of the Journey””

This is a text widget, which allows you to add text or HTML to your sidebar. You can use them to display text, links, images, HTML, or a combination of these. Edit them in the Widget section of the Customizer.